Skip to Main Content
Back to MARC ALEXANDER
SOLD

Currency conversion from USD to:

Medium: Ink and Acrylic on Canvas

I Only Count The Hours That Are Serene

Currency conversion from USD to:

Medium: Ink and Acrylic on Canvas

Medium: Oil and Silver Leaf on Board 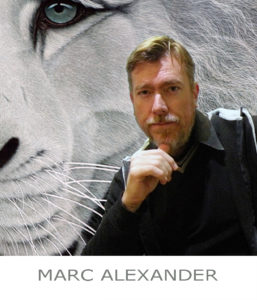 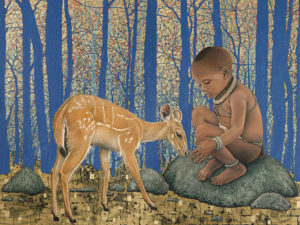 “My artworks often depict an idealized interaction between humans and the natural world. I am intrigued by this subject matter because I believe that a connection with creation is a mechanism by which we may better understand the mysteries and revelation of Creator God. Growing up in this fast-changing world of lost cultural identities has been a challenge to me, so I often include traditionally dressed subjects into my paintings in an attempt to recapture the narrative elements of almost forgotten cultures and simpler times when nature was less vulnerable. The use of silver and gold leaf with my oils plays an important role in transforming and elevating my subject matter and serves as a connection to the past.”

Marc was born in Pretoria, South Africa, but now lives and works in Cape Town. He is best known for his hyper-realistic portraiture and wildlife paintings.

Marc paints mostly in oils in the traditional style of the ‘Dutch and Flemish’ realists, but he also enjoys combining gilding and texturing in his oil paintings. He aims always to capture and express subjects and themes about our world and the human condition, especially those themes that challenge the way we live.

His interest in art started when as a young child, he discovered an ability to replicate on canvas with accuracy what he saw in nature. Besides his large body of original artworks, Marc is also well known for his masterful reproductions of old masters. From December 1994 Marc worked as the Museum Technologist and curator at the Pretoria Art Museum and during this time he made near-perfect reproductions of 17th Century paintings from the Museum’s collection. It was also during this time that he started a work amongst orphans and vulnerable street children, using art as a medium for healing. This turned into a very successful not-for-profit organization called ‘The Tshwane Art Kids’ which brought healing and restoration to many Children.

In 2010 – 2012, Marc focused on South African heritage and iconic portraits of late President Nelson Mandela and many other philanthropists that formed part of his acclaimed Legacy Series.

In 2014 Marc’s exhibition titled ‘In the Balance – wildlife on the edge of extinction’ was a series of wildlife oil paintings that showcased the magnificence of some critically endangered animals, such as the Siberian Tiger, Sumatran Orangutan, Hawksbill Turtle, Black Rhino and Riverine Rabbit, to mention a few, superbly painted in Alexander’s hyper-realistic style.

Marc is a forerunner amongst South Africa’s contemporary artists and has a substantial international following of collectors. Since August 2015, Marc and his wife Lindy have been directing and managing The Studio Art Gallery, which they now own. This gallery has become a sought-after contemporary art space with a dynamic exhibitions calendar.