Skip to Main Content
Back to ARTIST PRINTS ON PAPER

Calm After The Storm 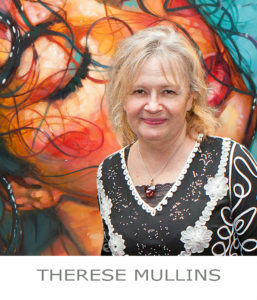 Yet her talent was then left largely dormant for several decades as she pursued and excelled in a career in fashion design.

Finally, in 2013 she enrolled in an oil painting course and discovered her medium and genre of choice: oil paint and large, detailed portraits.

“I love how oil allows for as many overlays as needed. Until the perfect mood is captured,” comments Therese. “The subject matter of the human face, though honest and straightforward, can reveal endless layers of meaning and emotion. The larger the canvas, the deeper one can dig into what’s there.”

After the acclaim her first Mandela portrait received, she embarked on a full-time career as a professional painter. Since then, she has sold her work across the world and been commissioned for numerous note-worthy portraits. In addition, she has excelled in every competition she has had time to enter: having been twice short-listed in the Sanlam Portrait Awards and chosen as one of South Africa’s Portrait Masters in 2017.

Perhaps her most poignant work so far has been the large portrait of her deceased son, Ryan. Featuring her son with a smile and his much-loved, skateboard helmet on, she shares, “It’s as though – with every brush stroke – I tried to bring him back to life.”

Another artwork worth highlighting is her self-portrait. Her remaining son, Terran, shares the background story:

“I remember visiting the little Kalk Bay studio where my mom painted. I found a painting facing the wrong way, against the wall in the corner. Our conversation went like this…

Me: ‘Mom, wow. You didn’t tell me about this one. It’s stunning.’
Mom: ‘Oh, don’t look at that. That’s the board for my leftover paint.’
Me: ‘Huh? But it’s a painting.’
Mom: ‘At the end of the day, I have paint on my palette and, instead of throwing it away, I just empty it out on that board.’
Me: ‘But it’s you, right?’
Mom: ‘Yes, it’s become a self-portrait of leftover paint.’

Never mind the magnificent creation itself, the story captures my mom – she always puts herself last, and she radiates with a beauty as a result.”

Other than painting, Therese enjoys spending time with her husband, Allan Mullins. She also is a devoted grand-mom to five small kids, the oldest of whom (at age 8) emerged as a prodigy oil painter himself. (See his attached Van Gogh imitation).